This Easy Brown Sugar Cola Glazed Ham is made in the slow cooker! It’s the perfect shortcut for the holidays.

I grew up in a family that didn’t care for turkey, so it never made an appearance on our “turkey day.”  I was ok with that for my childhood, because I had never even tried turkey until I met my husband.

When I met Zack 15 years ago, we enjoyed Thanksgiving at his mom’s house, of course there was turkey. It was the first time I had ever eaten it.

It was only the beginning of bringing turkey to our Thanksgiving table. Who would have thought that I missed out on so much turkey!

Enough turkey talk, this is a ham recipe, if you’re looking for turkey, you must try out delectable Pomegranate Glazed Turkey!

Let’s talk ham. As you can tell from my childhood I have eaten my fair share of ham.

3 holidays a year; Thanksgiving, Christmas, and Easter. I know a tasty ham! 😉 This ham is not only tasty, it’s made in the slow cooker.

A slow cooker ham? That means you have a chance to sit and relax. I don’t know about you, when it comes to hosting a holiday, it can be a lot of fun, and a lot of on your feet in the kitchen cooking and baking.

How do you ham in the slow cooker?

First let’s choose our ham, I like buying a pre-sliced bone in ham. You need to take into account the size of your slow cooker, and how many you will be feeding. This ham is a 5 pound bone in ham and it will feed about 5 people. I have a slow cooker on the smaller side, and it wasn’t feeding very many people.

Once you have the ham picked out (more about how to choose the size below) You should line your slow cooker with a slow cooker liner. Reynolds makes them, and they are so great at keeping clean up to a bare minimal.

Then you’re going to make the brown sugar cola sauce according to the directions. Once that’s made, pour it over your ham, making sure to get in between all the slices. Cover and cook for 6 to 8 hours on low or 4 to 6 hours on high.

How do I know what size ham that I need?

The general rule is 3/4th’s to 1 pound of ham per person, when buying a bone in ham. We like having leftovers for sandwich’s, so for our family of 4, a 5 pound bone in ham is perfect.

What are the best sides to serve with ham?

This short cut ham tastes as if you baked it in the oven, and took care of it. Tenting the foil just right.

You can tell everyone your secret if you want. Or it can be our little secret. 🙂 No big deal, when you place this juicy flavorful ham on the table, nobody will be none the wiser. 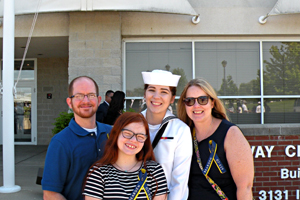 Hey, I'm Joanna, and I'm so glad that you stopped by! Here at Everyday Made Fresh you will find a variety of topics. However, my heart is in the kitchen so I like to share recipes for the busy family in mind. Most meals only require 30 minutes of your time, and the ingredients can easily be found at your local grocery store. Read More!